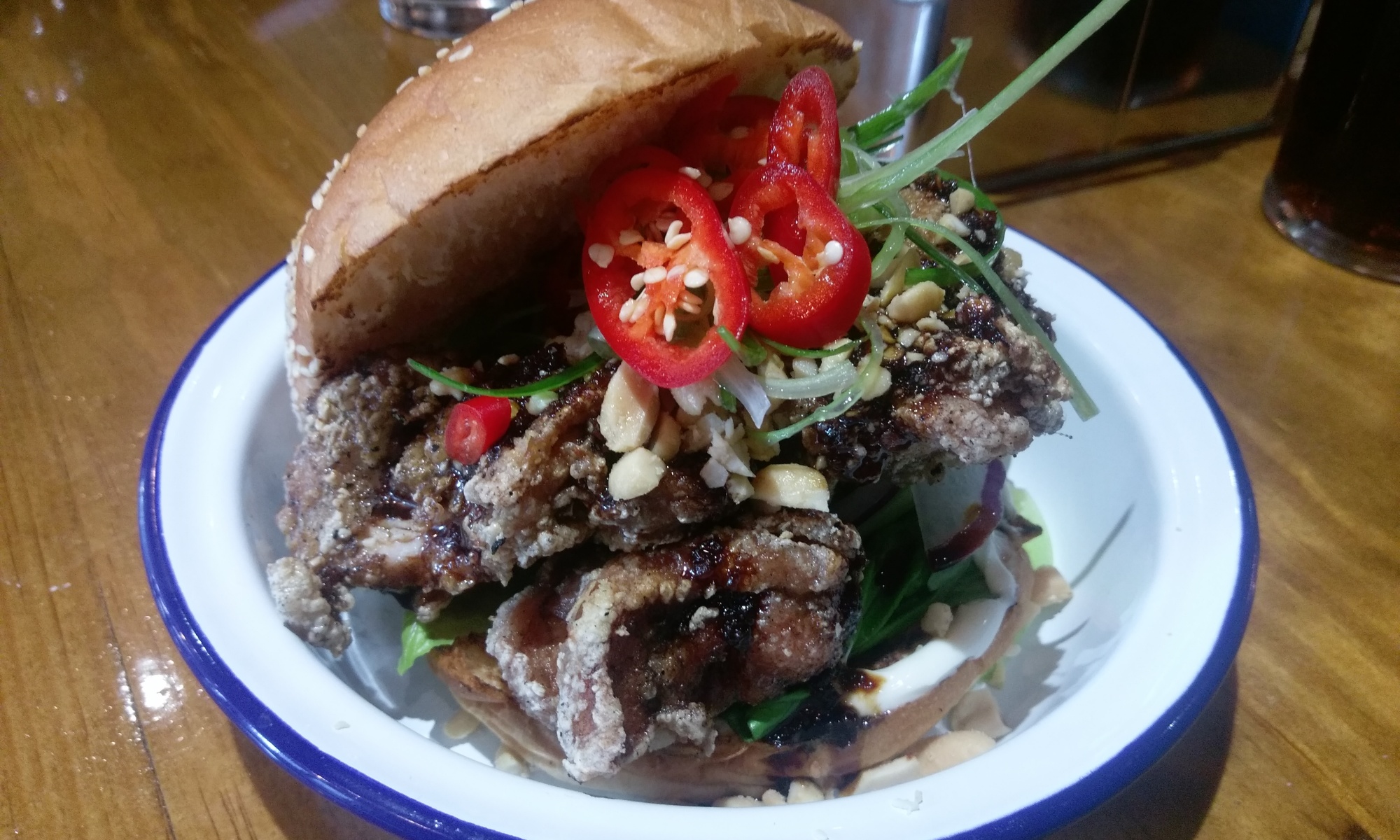 Working opposite Kong’s and living near The Golden Lion has meant I  wasnever further than a hop, skip and chubby jump from tucking into a Burger Theory or three. I have been dragging friends in and calling ahead after late shifts at the hospital (thank you Rory for all those times you put a wee something extra in my bag!) for something comforting to eat before collapsing…I suppose you can say Burger Theory is one of those food places you come to rely on to fill an empty space, like Mum’s Roast Chicken or a cup of tea in a crisis.

Anyway, they went and sodding shut both pop-ups for a few months to open at the old Europa site and I have been bereft without my KFC (Korean Fried Chicken) burger.

Luckily for me, they invited me to come and try the new restaurant so I grabbed my equally greedy friend Bristol Eating and headed over to see what they did with the resturant that infmously created #Toastgate.

Ordered a chicken Kiev. I have no words. What did happen to that triangle of toast? WHY?! pic.twitter.com/zOj7gAlR3j

The resturant has been transformed with a colour pallete that is feeling familair, beautful blue walls, wooden bar and signage, tables that aren’t overly packed together with a mix of bench and chair seating and lots of colourful stuff on the walls.

I wouldn’t be doing my “job” properly if I didn’t get the bad out of the way, we did stand there for a while waiting to be seated (I had booked ahead), they were incredibly busy so it can be forgiven but a quicker acknowledgement of us being there would have been gratefully recived. The food also took an age to come out too but again, they had over 65 covers over lunch and I wasn’t in a rush to get back to the office. Just worth considering if you are planning to head over whilst the dust is still settling at the restaurant and your boss is an arsehole about long lunches. 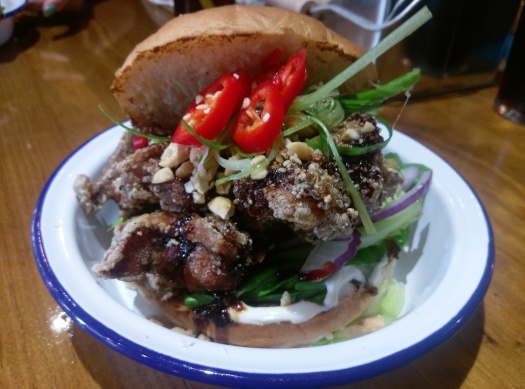 I went for the the KFC, of course, and my friend had the Prarie Girl with BBQ sauce. The KFC is a fried chicken thigh sopping with a Korean BBQ style sauce, greens, chillis and salted peanuts. The Prarie girl (a firm office fave) is a buttermilk fried chicken burger coated with Frank’s hot sauce and cool blue cheese dressing or BBQ sauce.

Other offerings include The Beefy Boy, a beer braised beef rib in a black pepper glaze on hash brown with pink pickled onions and mustard mayo or their infamous veggie burger the Southern Hippie, a southern fried Portobello mushroom with halloumi, Franks hot sauce and cool blue cheese dressing or BBQ sauce.

We both had fries as sides (they have plenty to choose from, even poutine (but not cheese curd poutine)) and chose Blue Cheese mayo and Garlic Mayo for side dipping sauces, a nice extra you didn’t used to get in the old sites. The burgers arrived and were enormous, which was lucky because I was about ready to eat the customer next to me. Fries followed close after and were cripsy and piping hot, which for fries is good. Despite the wonderfully staged photo below it was a knife and fork job, which TBH now i’m over 30 is how I tend to tackle burgers. Everything tasted as good as it ever did, the service was friendly with all of them working doubly hard with the success they are enjoying.

I can’t wait to redeem my Crowdfunder meal and I will be dragging friends down for a birthday too. Welcome back Burger Theory, we missed you.

One Reply to “Review – Burger Theory”