I never really bothered with the Robin Hood Retreat in the past, it always looked too gastro-pubby for our liking and also didn’t allow smoking in the garden. Very quietly one day the doors closed, the sign came down and builders moved in leaving us wondering what was going on. Eventually through some twitter searching I was delighted to find out that the pub had been taken over by Zazu’s Kitchen I am assuming off the back of their successful opening of The Green Bank over in Easton.

With St Paul’s carnival happening down the road (I can’t bare it, too many people crammed into a tiny space) I thought it the perfect weekend to pop down with a few friends and sample what The Grace had to offer. First impressions were friendly, attentive bar staff, the interior hadn’t changed too much but they had changed the colour scheme giving the space a much lighter feel than the previous reds and greens. They had a good range of beers on tap, we both had a Hank by Tiny Rebel and got change from £8 which in this day and age is quite the feat! I noted they had a good range of ciders, served Freedom Lager (organic if you care about that sort of thing) and have Arbour Triple Hop too. They stoked my absolute favourites Wiper and True bottles in the fridge which in itself means I will be back! We retreated to the garden and were really impressed with update. Plenty of seating, lovely apple trees and flowers around the borders and a real suntrap. I also loved that there was seating for larger groups, something you sometimes have to compromise on if a few of you are heading out for the day. 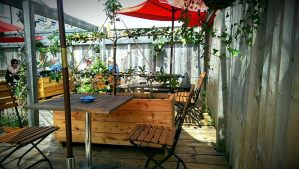 Eventually hunger striked as is the way when you have been sat in the sun for a few hours we decided to order a few bits from their new “small plates” menu. One of the party had pork scratchings ordered which were made fresh specially (they had run out but it wasn’t too much trouble). We then picked the roasted potatoes which came with a garlic aioli and a lovely chutney, the beetroot salad which was lovely and fresh, the chicken and lemon skewers which were served with a spicy harrissa yogurt and tried some mini pizza’s too. We went for salami and fennel, ham and walnut and the goats curd all of which were served promptly by lovely staff. Everything tasted really fresh and was the perfect sitting out accompaniment. Here is the menu that they tweeted for a better idea https://twitter.com/TheGraceGlosRd/status/485112513194106880/photo/1

The only issues we had were that the beers kept coming on and off (I ordered an Arbour which wasn’t right but was swapped with no fuss at all) though I would expect teething issues with a pub that has only been open 3 days today. The waitresses were also left wondering around with plates of food a lot as there was no system until later in the evening to show them who had ordered what outside. Eventually we were given a rather charming old Oxo tin which did the job.

I highly recommend heading down before everyone realises how nice the garden is!

One Reply to “The Grace – Gloucester Road”